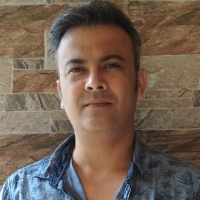 Now you can Instantly Chat with Abhishek!

Have implemented more than 5 Big Data projects E2E on cloud and on-premises. Also have experience on on-prem to cloud migration.

I am leading this project which is intended to migrate the on-premises Hadoop / Spark clusters to AWS cloud environment. It involves migration of Terabytes of data along with the metadata and ongoing scheduled jobs in Autosys and the new Big Data workflow in EMR. Alogwith the migration parallely new development is also being performed by our team using Airflow.Data migration is being performed by a tool WANdisco.

My role and responsibilities :

· Working on migration of huge data by creating replication rules in WANdico.

· Doing code remediation in which Spark, Hive, Sqoop etc. jobs are migrated from on premises to AWS EMR and then they are run there. This is the most challenging step which requires lot of code changes and troubleshooting skills.

· Created Pyspark dataframes and performed joins and complex aggregations on them, and finally stored them in hive tables.

· Developed DAGs to migrate data from Hive to Snowflake.

· Fixed lot of bugs which arise due to version mismatches in on-premises Hadoop clusters and EMR and also due to different file formats.

· Helping other team members in resolving their issues and bugs.

· Managing 8 members team and reolve the technical/functional issues encountered by other team members..

Client was a well known Payment gateway based out of US and this project was about India Data Localization rule in which all the transactions done in India must be localized to Indian Data centers. So Big Data Platform was developed and the flows and scheduled jobs along with the application data was moved to India data centers and also the applications were moved from other tools like Ab Initio to Spark and Hive to facilitate huge data processing in an optimum and faster way.

My role was of Senior Data Engineer & responsibilities were as follows:

· Interacted with the client and Business Analysts, involved in meetings for gathering requirements for the flows to be migrated.

· Worked on the migration of data from existing systems i.e. Ab-Initio to Hortonworks environment Hive by using Spark. Understood the Ab Initio transformation and created equivalent Spark functions as part of the application migration to Big Data.

· Developed the Spark Scala code by using functional aspects, for migrating business logic from Ab Initio to Spark and Hive.

· Developed unit test cases for each function by using Funsuite and BeforeAndAfterAll framework.

Client was an American multinational manufacturer and marketer of prestige skincare, makeup, fragrance and hair care products. Project was all about to create a Big Data platform to facilitate the processing of the huge volume of the data and then to load in the processing layer for reporting purpose.

My roles and responsibilities:

· Developed Data Integration scripts using Azure Data Factory to ingest data from BLOB storage to ADLS and then to process the data in Databricks.

· Developed unit test cases for each function by using Funsuite and BeforeAndAfterAll framework.

· Reviewed code and did documentation for support team for the modules, which we moved to production

Project was about to implement Big Data solution in GCP.

· Involved in customer calls for requirements gathering and for scrum meetings.

· Created a target dataset in BigQuery for each source system and loaded the history data using the appropriate component in GCP for all the entities identified as part of data modeling.

· Created tables in various layers/datasets (Stage layer, Conformed layer) in BigQuery and loaded data from landing/staging layer, based on the given Functional Mapping Document. It involved transformations.

· Created spark dataframes and performed various joins, complex aggregations and other transformations, as per the business logic.

· Reviewed code and did documentation for support team for the modules, which we moved to production

Client was an American multinational technology company headquartered in California that designs, develops, and sells consumer electronics (one of the largest companies), computer software, and online services.

• Implemented Schema Registry to define the schema of the Kafka messages.

• Used Kafka HDFS connector to export data from Kafka topics to HDFS files and integrates with Hive to make data immediately available for querying with HiveQL.

• Did POCs for exploring KSQL in the project.